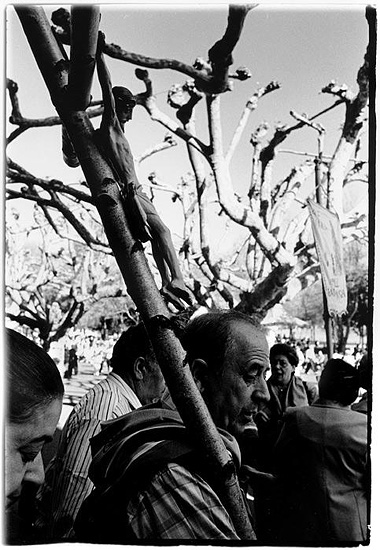 In the heart of the Pyrenees, Lourdes receives 5 million visitors from all over the world every year.
Spirituality, whether belonging to history or legends, is part of the present through the depth and beauty of the sight, the marks of the past, the serenity of the Sanctuaries.
Lourdes was just a small market town on the 11 February, when Bernadette Soubirous met, along the Gave, the ?Lady? that made the town a Marian city.
Today Lourdes has the second greatest number of hotels in France with 270 establishments.
Its geographical position, at the foot of the mountains makes it an ideal starting-point of excursions to the Pyrenees.

What happened in Lourdes in 1858 :
Lourdes, in the 19th century, was one of the main places in the district with more than 4,000 inhabitants and situated on the banks of the river Gave de Pau. Mills were plentiful ; many were dotted around outside the town.
In one of these, the Boly Mill, François and Louise Soubirous lived happily for 10 years together with their 4 children? The eldest was christened Marie-Bernadette but called Bernadette (born 7th January 1844).
In 1854 the Soubirous family were reduced to extreme poverty as a result of an accident at work b
linded François in one eye, he was falsely accused of having stolen two sacks of flour and the bankruptcy of the mill. Finally, 38 died of cholera in Lourdes. Bernadette was stricken by cholera and tuberculoses. She was to suffer the consequences throughout the rest of her life. The family had to leave the mill and in 1857 had taken refuge in a disused prison cell of 16 m2 called ?the Cachot?.
At 14 years of age, unable to read or write, not having made her First Communion, Bernadette, bruised by all these events, was to have an extraordinary experience.

The first apparition :
On 11th. February 1858, Bernadette, her sister Toinette and a friend, Jeanne Abadie, went looking for firewood in the cave called Massabielle, beside the River Gave. While Toinette and Jeanne gathered wood, Bernadette heard a sound like a gust of wind. ?Lifting her head, she saw, in the crevice of the rock, a young girl, surrounded by light, who looked at her and smiled.?
That was the first apparition, 17 others were to follow.
On 4th July 1866, Bernadette left Lourdes for Nevers where she entered, as a nun, the Convent of St. Gildard. She died there on 16th April 1879, where her body still lies.