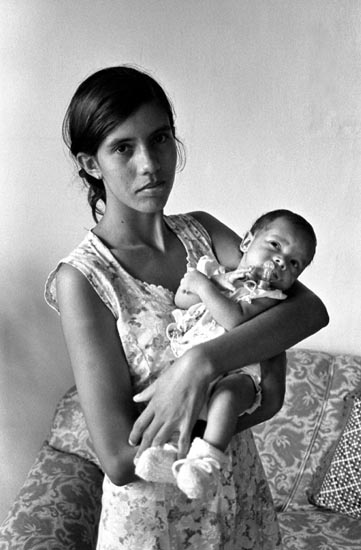 Faces of my people

In a land where the alphabets are those capable to draw their name, and, believe me, with as much skill to hold the pen that sometimes they suffer from cramps, the problem of maternity without protection, extremely frequent and many times extremely precocious assumes alarming contours.

What for, after all, are these beings coming to the world? A great northeastern poet, refering to the still-borns, proposes:
"before, human jelly, don't progress
and in indefinite retrogradations,
return to the old calm inexistence!...
Rather Nothing, oh! germ, that still have
to reach, as the germ of other beings,
the supreme misfortune of being soul ".
I don't know if I would be so extreme. I don't think that I would find life so miserable. But sometimes...

In view that talent does not choose groups, imagine how many Beethovens, Caravaggios, Camões or Michelangelos are harvested every day simply because they had appeared in the wrong group. Talent doesn't exist in desert ground, it can't exist: intelligence does not resist the scarcity of all the rest. In my country, it is said, 80% of the money is in the hands of less than 10% of the people.

The possibility, therefore, for a genius to appear in a group where his development it's possible is less than one in ten when the entire country is in perspective. Therefore we don't have literature, we don't have music, we don't have art (and don't talk me about Caetanos Velosos and Paulos Coelhos). I don't see how we'll have it: the little that was done or it's not appreciated or it's not understood.

When I make photos of this kind I'm not a thinking being. I'm a "photographing" being. But, later, when I look at the finished copy, these thoughts come to me, and they come as slaps, exploding in my smooth face, whose look is addressed to the child with a so insisten
t as bothering enquire: waht kind of genius you could be if you had the chance ?