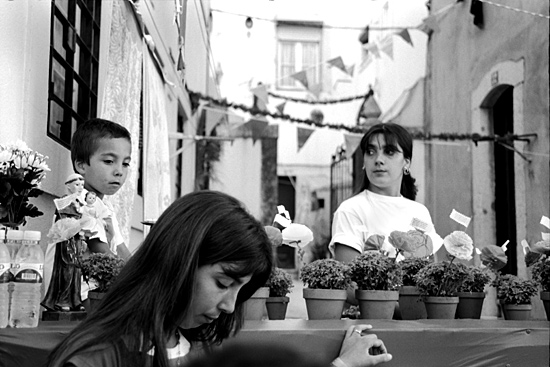 Is hot and it smells of basil. It's in June that this procession that goes up and down the oldest part of the city, the entrails of Lisbon is celebrated.

The crowd waits for the saint outside his church. They're hundreds that flood the streets, and for moments it seems that the centre of the city is in the place where always belonged.

The murmur of the crowd rises while they wait for the image that makes the miracle of the Sun, increases a little and soon the silence falls down all.

It smells of basil and it's hot. The image and procession go up. I doubt that the jeep fits into the alleys of the city's heart, but a priest guarantees me that if in my machine everything fits, the jeep will also fit in the alleys.
Congregations and sad eyes boys accept water cups that the establishments offer them. They go down. The saint profits the pure air to get rid of traces and to visit his friends where he stops.

The bigots make the sign of cross, kneel, cry and elbowed each other to arrive at the front line and feel the breath of the matchmaker saint. They go up. Many resist the fatigue from the heat and follow the procession that grows as it moves forward. They go down.

Repeated gestures, furtive looks, sighs of desire, smells and odours, Alfama return everything in double and nobody is inhibited. All go up.

During hours we wind as if we were a unique line, behind or in front, an image lead in four wheels. It goes down. The priests mark the rhythm in the alleys with a litany, that of being so repeated lost the value and knows will be buried one day. It goes up.

The Sun doesn't hide and some times I ask myself if the miracle happened, or if it's only this, the fact it exists and it's strong enough to make lose the forces of this lace that goes up and down, as if faith was placed for test. It goes up a bit more...

Finally it goes down, and down and down. I glimpse the necklace of the city mayor, look on the ground, hands in prayer, as to penance himself from the night in the disco, the perfume of the women and the tired lips. One can think that he prays, but he protects the eyes from the lack of sunglasses. Ah, if my sagacious look had a devout brightness! It would make miracles! Can it be possible my Saint António? Who knows what he had asked for...

Somebody asks me for a photo as proof of presence. It's necessary to prove one's faith, so the devil won't weave them.

Mass is celebrated outside the Sé and all want to hear.

The kids run to spend the money that hoped inside their altars. They thank the Saint for the sweets.

Colourful Alfama with smell of basil breathes deep, releases heat and it's like a sea running to the river.