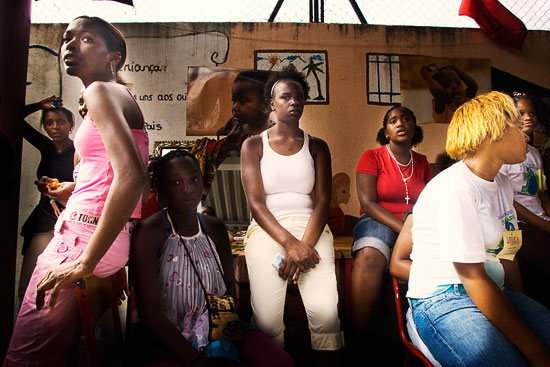 The greatest metropolitan area of Portugal?s, Lisbon, is home to near 3 million people, 30% of the national population.

After the Carnation?s Revolution in 1974, which replaced dictatorship with democracy, all African colonies (Angola, Cape Verde, São Tomé and Principe, Mozambique, Guiné Bissau) obtained independence and many immigrants, specially from Cape Verde islands moved to Lisbon for political or economical reasons. They settled mainly in Amadora in Lisbon's suburbs, often building illegal slums in abandoned areas.

The second immigrant's generation has several problems facing prejudice, economical, educational and political disadvantages compared to the rest of the Portuguese population, who themselves are generally far behind the European average. Youngs and teenagers are torn between two worlds. On one side, there?s the homeland of their parents they?ve never seen with it?s culture and tradition, on the other hand the country where they were born in which they are not citizens. As a way of subsistence, drug traffic and crime are very frequent.

Slums are being systematically demolished as their owners are relocated. Several times, people inhabiting those slums are left homeless. They form ghettos with their own code of conduct and rules. Police usually only goes there in groups and stories of oppression and abuse are frequent. On the other side, several police officers were murdered on duty in these slums.

A number of non governamental organizations essays to re-educate children, but usually does it in a paternalistic way, and at a given age they have to let the kids follow their own way.