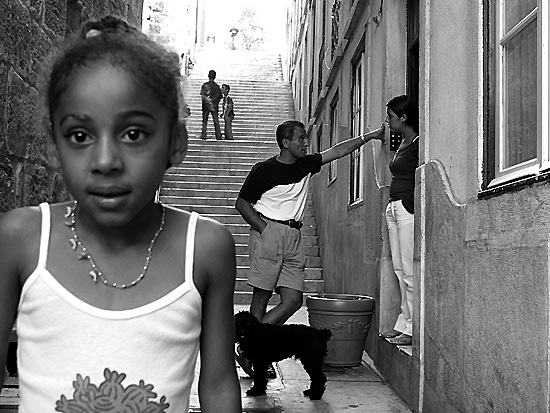 Alfama it's Easy to Love

Mussulmans called it Al-Alhaman (the fountain) for its several fountains that provide drinkable water to Lisbon. Alfama ended in the sea in a big sandy beach that surrounded Lisbon.

In the XIV and XV centuries it was one of the neighbourhoods were religious minorities lived. There lived the Jews that worked in the naval shipyards at the entrances of Alfama. Nowadays only the name of the alley Street of the Jewry (Rua da Judiaria), a dark and melancholic narrow street in Alfama, evokes the ephemera existence of this Jewish guetto.

It lodged the General Studies, in the XV and XVI centuries. Although restricted in the end of the XV, the number of students justified the creation of this university germ, maintained in the Street of the General Schools (Rua das Escolas Gerais) until it was definitely transferred to Coimbra in 1537.

Alfama is one of the areas in Lisbon that survived the big earthquake in 1755, and through it we can imagine how Lisbon looked like in those years.

In the XIX century Alfama had several workshops relegated by "progress" to the outside of the city. In this neighbourhood existed industries of tanning, biscuits, repair-shops, slaughterhouses, potteries, recovery of
rags and used paper, candles and wax.

Today it's essentially a dormitory and historical neighbourhood of Lisbon, where it's not hard to get lost. Its alleys, narrow streets and lanes, articulate between themselves by flights of stairs that climb until the unevenness of the hill.

It's in this eternal up and down that we discover a different world than the cosmopolitan avenues and shopping centres. Walking in these alleys makes us feel in another atmosphere, where the urban noise cannot trouble us, as if this was a different world... a micro-cosmos inside the European Lisbon.

Between these narrow streets that exhale smells and fragrances, tragedies of love and death, we feel the ?fado?. "Desgarrado" or "vadio" (two distinct forms of singing the fado), it's easy to find a nice spot through the many small taverns or restaurants that invite the appreciators of this Portuguese art.

This is Alfama, a neighbourhood we can call labyrinthine, confuse, agglomerated, coloured, mazy, twisted, full of branches of little streets, arches, inner yards, alleys, stairways and planes, entrances and yards.

Essentially this is a typical neighbourhood, one where neighbours still talk from door to door, window to window, across the streets... like in the old days, of Mussulmans and Jews.