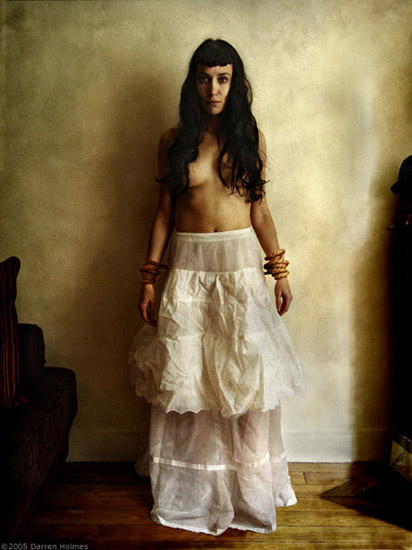 
Let your dream devour your life, not your life devour your dream...these words by Antoine de Saint-Exupery embody the spirit of the work of Darren Holmes. A life devoured by a dream, and the result is photography where emotion rules. Technique and material concerns have little place in this world, Darren's works deal with other, simpler matters: those of the soul.

Born in 1969 in North Bay, Canada, this artist developed very quickly a passion for the immediacy of expression that photography allows. The subjects he portrays are often enveloped in light and texture which seem to evoke ageless voices from times past, interplay between space and subject being an omnipresent quality in his works. Darren often appears as his own subject in his work as well as working with others, which gives his expression an even more personal, solitary feeling. Empty yet eloquent looks, simple and subtle poses, the attitude of his subjects shows little but says much, deepening the mystery which seems to emanate from his imagery. Lines which we normally rely on blur and disappear. Both femininity and masculinity, light and dark, the beautiful and the repellent...these are works of contradiction which make them, somehow, more coherent.

The body of work of this artist remains difficult to define and well beyond words. "I would say that emotion is the only thing that has motivated me to do anything" affirms Darren Holmes, reminding us that his work should be simply felt rather than studied or described. Shhh.