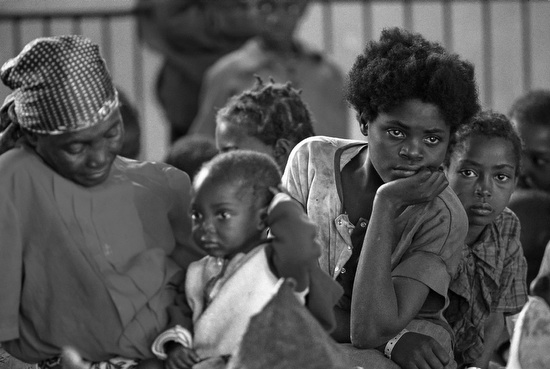 To photograph in Angola, by itself is not an easy task. The hard reality of survivors of 38 years of war establishes a tense condition in the relation between photographed/photographer.

It has been two wars. First the one of independence and later the fratricide fight of a civil war that attracted world-wide attention. By Angola had passed troops from South Africa and of Cuba, what means U.S.A. and the former Soviet Union.

The camera is associated to spies, of both sides. This perception persists until today or at least it persisted up to 1999. More for convenience than for any another reason.

In Angola a camera means the possibility of gaining an extra money or the camera itself. Even common citizen says that's forbidden to photograph. At that time the smallestr wage in Angola was 12 dollars and the greateest 200. Angolans had to turn themselves inside out to survive.

The biggest question imposed to a photographer in Angola is precisely: how to photograph? After all they are victims of a cruel war, or two. People who lost everything or almost everything. Less their dignity, will of living and hope of happyness. Fortunately war ended in 2002.