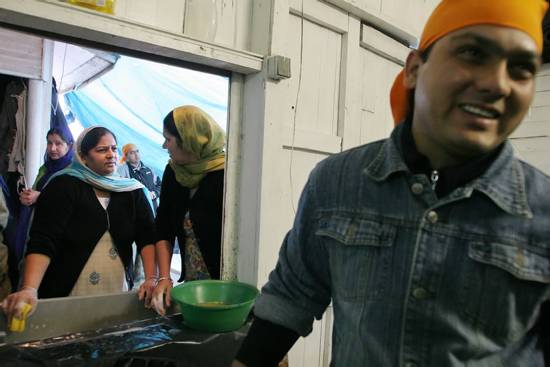 Sikhism was born in Punjab among Muslims and Hindus in the beginning of the XVI century. It all started with Guru Nanak Dev who fought the cast system and discrimination based on sex, faith or race. Nowadays Sikhism has 500 years and 23 million followers all over the world, being the 8th major organized form of religion.

Due to their turbans and long beards, Sikhs were discriminated outside India after September 11th, and some were killed by people who though they were Talibans. However, Sikhs are peaceful.

All Sikh women are baptized Kaur as last name, which means Princess; and all men are Singh, that stands for Lion. These Princesses and Lions live in India and all over the world, and express their faith in local Gurdwaras. These, are the home for the Sri Guru Granth Saheb Ji, a wholly book that contains all the teachings of former human Gurus, Hindus and Muslin saints. This book is the only actual Guru recognized by the Sikhs, and was implemented in the XVII century, by Guru Gobind Singh, the last human Guru.

When entering a Gurdwara, one must take the shoes off; hide the hair with the help of turbans or "chunnis" (long, flowing veils worn by Sikh women, the symbol that every woman is a princess); wash hands and feet; bow at the entrance; offer money or food to maintain Gurwara and, finally pray and sing chants. All Gurdwaras are open 24/7, food is free regardless of sex, race or credo.

It?s in Gurdwaras that Sikhs come together with God, and practice the most valued action of their faith: share with others. This can be observed during the Langar (principal Sunday meal) where everybody seats on the ground at the same level, representing equality among all humans, while volunteers cook and distribute the vegetarian food, and others wash dishes.