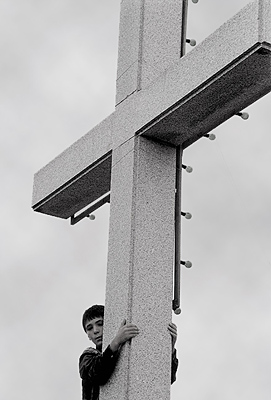 The Pilgrimage of the Holy Bath in honour of S. Bartolomeu, originated on the 16th century A.D., still remains to the present day.

Every year the village of S. Bartolomeu do Mar receives hundreds of children and thousands of faithful who celebrate this old tradition.

According to the legend, on this day the "devil drifts free", only to return to the sea when it gets dark, and Saint Bartolomeu appears as the saint that holds him, through the symbolism of the dog leashed to his image. On this day, he sets the ?beast? free and everything is allowed.

The ritual is represented by the parents who head towards the church with the child who must hold a black chicken in his arms. Before entering, they walk around the church three times. Then, there is the "offering of the chicken", after which they place the image of S. Bartolomeu on the head.

Later they head for the beach, for the holy bath. The children bath, during the day, in the pure "and frozen waters" of the Atlantic Ocean. The child is held by the "banheiro", generally a sargaceiro*, who initiates a baptism. The immersions on the water must be made on an odd number of waves. Each bath costs 5 Euros, but the elderly still remember the bath to be the 20 Escudos** and that people had to have a license to perform it. The diving must be with the head first, and the ?banheiro? dries the child before delivering him to his parents.

People say that this baptism cures epilepsy, eliminates fears and harm influences and ?hunts away? all the illnesses and curses of the devil. The adults also repeat a series of rites to move away the demonic effects.

Later, the whole family walks up to the dunes where they dry up their tears and their fears, sitting together to eat "the dinner" that they brought with them in a pan, along with a towel, a blanket to sit on, and a demijohn of ?verde?***, with other regional food.

The black chicken was left with the hens in the Brotherhood?s chicken cage
.

---
Notes:
*person whose job is to collect special algae to sell for further processing.
**in the old Portuguese currency, approx. 10 cents.
***a special type of Portuguese light wine, most common in the north of the country