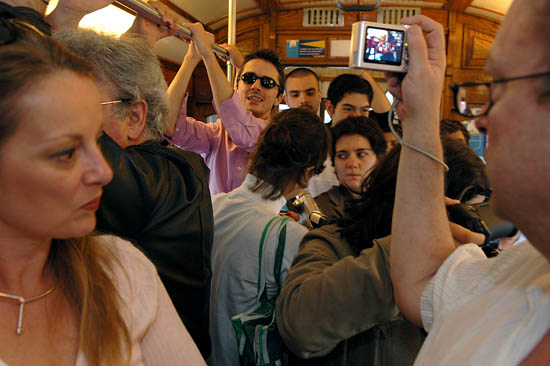 During the month of June the Lisbon Festivities invade the Tramway in the form of Fado.

Singers and players bring their art to what in the rest of the year is a normal line, attracting quite a broad audience. Fado lovers, friends and neighbours of the musicians, tourists and common curious people, all join the regular passengers in the craziest carriers of the year.

When the tramway reaches de end of the line, everybody wants to keep theirs seats for the return. The driver has a lot of trouble explaining that everyone must get out, even if it's to get back in again right away. The mood is of total rejoice, with everyone singing along and clapping.

In the end of the tour they renew their vows of coming back the next day of Fado at the Tramway.