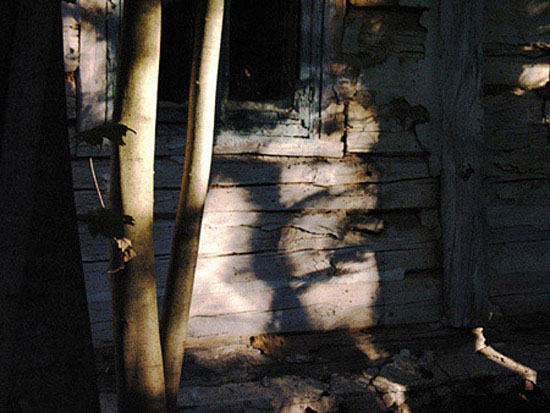 Tchernobyl:
Secular Village (XIII century). Small Datchas in the woods. 15.000 inhabitants.
The Nuclear Power Point was built in 1970, 12km in the North of the village.

Prypiat:
New city (200.000 inhabitants) 1970-1986.
Created for the workers of Nuclear Power Point of Tchernobyl, Ukraine.
Built at 3,5 km from the atomic power station

The night of the catastrophe, April 26th 1986 at 1h 32 am since the roofs of Prypiat, people observed, in family, the spectacle of nº4 engine which has just exploded 'It was like a large spray, with completely unreal colors, very beautiful, in blue and turquoises...' The gleam emitted by the open engine was visible from the village of Tchernobyl. And when the day rose covered the village, with large tasks of dew phosphorescent coloured. In the memory of the old ones, one had never seen anything like that.

As of the following day, April 27th, the evacuation of Prypiat starts. It will last 30 hours.
In a few days Tchernobyl and tens of villages are evacuated. Everywhere, the inhabitants must leave, without carrying anything. Extreme evacuation.

Plundering starts as of days which follow the exodus, and it continues still today in the radioactive ruins. It remains in these 'zones of exclusion' heaps of personal objects, things of life, abandoned in the rout.


'TCHERNOBYL FOREVER' is the 3rd chapter of the trilogy TRACES.