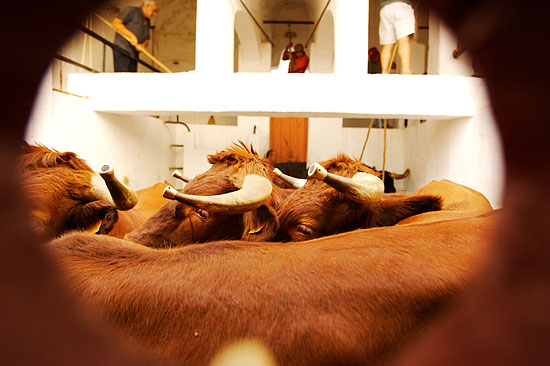 The main differences between Spanish and Portuguese bullfights arise during the reign of king Filipe V of Spain, the first of the Bourbons. This king was culturally closer to the ways of the French court and as such prohibited the noble from performing bullfights on horseback. This left the art to the urban bourgeoisie who took to the bullfight on foot. In Portugal there never was this kind of restriction, so the horseback bullfight continues as the main type.

Another typical event at a bullfight is the performance by various groups of "forcados". They basically stand in line and try to make the bull charge. The first one in line throws himself at the head of the bull, grabbing the horns with his armpits. Then his fellow "forcados" grab him and the bull and try to immobilize it.

In Portugal it is forbidden by law to kill the bull in the arena with one exception, a small town on the border with Spain, who had a special law voted for them. This does not mean the bull survives the fight. It is taken to the slaughterhouse afterwards.

The pictures were taken in the town of Moura in the Alentejo, a region of Portugal during a short visit to the arena while the fights were held.