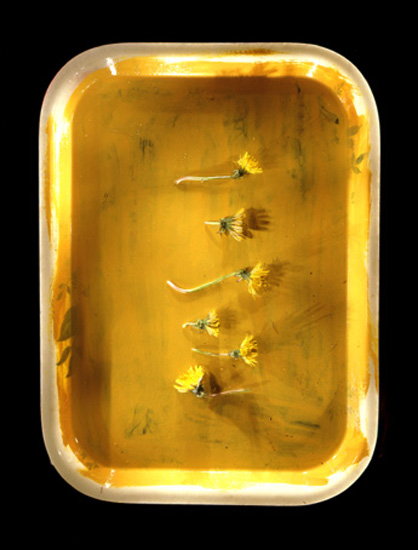 Light painting is literally "painting with light" and is an almost exact translation of the latin combination of Photo & Graph(y). Cameras must be mounted on a tripod in a blacked-out room with a cable release attached to the shutter release in order to minimise any trace of camera shake.

Pre-focussing and composition of the still life set or subject is done in ordinary room light and when everything is ready, the shutter is set to 'B' and the lens aperture to f.16 or f.22. for good depth of field. The technique itself is very simple to achieve but harder to describe as it involves keeping the torch in motion (as with darkroom dodging and burning for example) as you "flick" or wave the torch over an area you wish to highlight. Best results are achieved by keeping the light at a low angle to the side and moving around the subject painting-in folds, creases or whatever from a variety of opposing angles.

This is where the personal experimentation really begins. With a multitude of lenses, cameras, films, and torches all being different there really is no set "recipe" for achieving consistent results at the outset. By experimenting with different times of 20 seconds, 30 seconds & 40 seconds to begin with, and making notes on each frames exposure time, the right exposure time will eventually reveal itself for a subject or set-up of roughly "average" brig
htness or light reflectiveness.

It takes a while to understand just how responsive certain surfaces and subjects are when lit by a torch. White china or paper for example would require the merest of glances with the torch light to render itself well-exposed on film. Black cloth or dark, matt material on the other hand would require extra light painting before its more reluctant light-reflecting surface was rendered well-exposed. Shiney or varnished surfaces will retain in them the "journey" taken by your torch and I've even taken torch-lit portraits where the glassy surface of the eye recorded a star-shaped highlight around the pupil. The more textured the surface, the more fun you can have with it.

Some photographers have lit room sets with this technique. I've experimented with portraiture and the nude. It's a fascinating way of learning about light, and it brings an element of risk and unpredictability back to the sometimes overly-precise and predictable medium of photography. Since each choreographed movement of "painting" is humanly unrepeatable, it means every image is totally unique, a masterpiece of movement, timing, skill and judgement all combined within one frame.

My Light-painted still lifes are an attempt to explore the physical nature of everyday things, to emphasise the uniquely tactile and individual nature of so-called 'junk', and to explore the discarded remains of mass-produced packaging and modern materials. I am also drawn to liquids, spills, and commonplace iconic consumer products of our time.

I've realised that virtually all of my subjects seem to 'drift' into my life, or seek me out, or simply appear around the house, in friends and neighbours sheds, on local beaches, or they reveal themselves unexpectedly under my childrens beds or on the roadside on my street. I photograph these subject simply because they feature more prominently in my life than platinum bowls of grapes or exotic orchids. A battered and bleached piece of plastic washed ashore on a Norfolk beach has just as much right to be photographed as more traditional and over-worked, even cliched subject matter. By light painting these mysterious clumps of grass, or discarded items of waste in this way, I respond to their individual folds, creases, textures, and so on and attempt to reveal their individuality or their visual 'value' as apparently worthless yet incredibly unique subjects in their own right.

I am fascinated by what lies behind and beyond the immediate appearance of a subjects presentation, and I'm far more interested in the detritus and spillage of our materialistic lives than with glossy appearances. I have felt for some time now that contemporary still life photography in general is in need of a jolt and to me, this entails returning to look at the everyday stuff of life - plastics, liquids, containers, fast food etc as an antidote to the bright, shiney and boastfully brilliant which passes for so much of todays still life subject matter.

With the shutter open for 30 seconds or more, I literally paint the light from my small hand torch around my subjects in a way which eventually reveals a kind of parallel identity, or a hyper-reality, and reveals the detail of their construction or something about their physical 'personality' if such a thing exists. I'm intrigued by the internal architectures of my subjects and attempt to uncover the mystery and uniqueness of their properties. I try to convey a kind of direct, isolated simplicity which is economical and accessible, and which powerfully communicates a tactile, even sensual response to the most unpromising piece of discarded wood or broken toy.

My torchworks are also concerned with the nature of light itself and with the unique ability of the photographic medium to mask motion and movement as stillness, and to play uncomfortably with our concept of time. In this way my subjects can appear unnervingly unreal because they are lit by a light in motion as if an undulating landscape
were illuminated by a low, raking light from the west as well as the east at the same instant. The resulting shadows and highlights disturb our expectations of where light 'should' fall and where shadows 'should' appear, allowing us to view the subject as if from several viewpoints or times of day within the same condensed moment.

My aim is really to try to raise the status of my subjects - allowing the nature of light to give new meaning and value to the passed-over and the unseen or ignored. In doing so, I hope to challenge the viewer to accept and observe this piece of ?waste? or this ordinary thing in a new light, or to explore the mystery and uniqueness of its properties, what it contained or was attached to, to ask questions of its history and ownership, and to make comparisons between mass-produced packaging, and the incredible uniqueness and individuality of found/used matter.